More than 60 million years ago, prehensile limbs of primates evolved from the small hands of arboreal tree shrews. Significant changes took place in the brain for better muscle control, and eyes were relocated to the front of the face for the vision required for grasping. About 3.6 million years ago, the Hominidae family – whose members include the great apes, chimpanzees, orangutans & humans, acquired bipedalism – an erect posture, the members would locomote employing only its rare limbs. Bipedalism freed the frontal limbs from locomotion and paved the way for greater usage & precision of human hands. 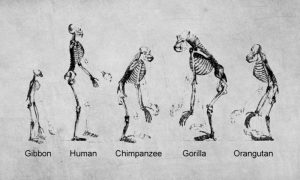